TNA Warns Srilankan government not to place new impediments in talks for 13++... 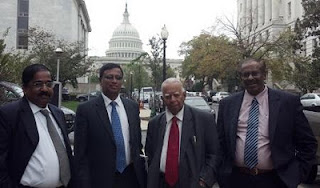 Reiterating the commitment of the Tamil National Alliance (TNA) to continue the talks aimed at arriving on an amicable political solution for the Tamils in Sri Lanka, the TNA on Saturday urged the government “to honour the mutual agreement reached and not to place new impediments to achieving an acceptable political solution that is desired by all the Peoples of Sri Lanka.”

Leader of the TNA R.Sampanthan said in a statement that after the talks resumed last month, and as per modalities agreed upon and confirmed in the minutes, it was “agreed that the bilateral talks between the government delegation and the TNA would continue and the consensus arrived at would be placed before the proposed Select Committee of Parliament. The TNA reiterates that its nomination to the PSC must await substantial consensus being reached at the bilateral talks, as was agreed.”

Outlining the manner in which the talks proceeded after resumption on November 16, he said that parties identified the issues to be discussed and agreed upon in evolving a political solution. The parties agreed on the specific order in which these issues were to be discussed and for this purpose scheduled four meetings - December 1, 6, 14, and 15. Thereafter, a time-table setting out these dates and issues was also circulated.

At the first of these meetings held on December 1, the Minister of External Affairs, G.L. Peiris indicated that without the TNA nominating its representatives to constitute the proposed Parliamentary Select Committee (PSC), the bilateral talks could not progress as previously agreed, Mr. Sampanthan said.

When the TNA reminded the government of the commitment already made, it requested time to deliberate and consequently a new meeting was scheduled for December 3. “Today despite lengthy discussions, the government delegation's position remained inconclusive,” he said.

Since the government – TNA talks began on January 10 this year, about 10 meetings were held. On August 4, the TNA walked out of the meeting, stating that no meaningful and purposeful dialogue could commence as the government had not responded to the TNA’s comprehensive proposals and that no purpose would be served by fixing a further date for talks unless and until the government made its response available.

Thereafter, after considerable back-room manoeuvrings, the TNA and the government agreed to recommence the dialogue.
Posted by Chennai Guy at 08:29