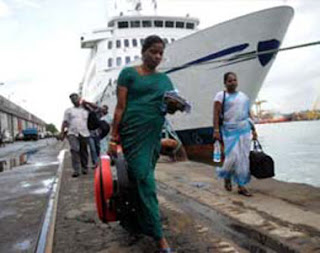 The Colombo-Tuticorin passenger ferry service which was started in June has been suspended indefinitely amidst some confusion with officials of both countries giving different reasons.

The Ceylon Shipping Corporation, the general agent for the ferry service, was informed by the Indian counterpart Flamingo Liners Ltd that the Scotia Prince ferry service would be halted due to “technical difficulties,” a CSC official said.

However, CSC General Manager Sunil Obbodage said the ferry service was suspended because not many people were using it. The Scotia Prince ferry started operation following an agreement between the Sri Lankan and Indian governments last year. Flamingo Chief Executive Officer R.C. Thimaiah said the ferry service was suspended due to operational difficulties.

He also denied reports that there was an outstanding amount to be paid to the Sri Lankan fuel supplier and said they were clearing the outstanding credit facilities.However, the local fuel supplier has filed a case at the Colombo Commercial High Courts against Flamingo Liners.

Currently, the Scotia Prince ferry has been detained by port authorities on a court order until the outstanding bill of more than US$ 400,000 is paid.