The Indian government is displeased with the statement made by Prime Minister D.M. Jayaratne in parliament during the debate on the extension of emergency regulations that three LTTE training camps were secretly operating in Tamil Nadu and the Indian External Affairs Ministry has summoned the Sri Lankan High Commissioner to Indian Prasad Kariyawasam to express its displeasure at the comment, diplomatic sources said.

Director General of Tamil Nadu Police, Latika Saran has told Chennai Online that she rejected the statement made by the Prime Minister and that there are no training camps in Tamil Nadu.

Is Sinhala Lanka trying to restrict "TOURISTS" from Tamilnadu to prevent Integration of Tamils ?

Sri Lanka is planning to restrict the number of tourists arriving in to the country, officials said. This comes soon after the Sri Lanka Tourism Development Authority (SLTDA) paid former English cricketer Tony Greig US$ 10,000 to be the tourism ambassador for six months.

SLTDA, Chairman, Dr. Nalaka Godahewa told the Island Financial Review that the tourism ministry would endorse a restriction on the number of arrivals.

He said taking into consideration the available room capacity and the 1,500 rooms under refurbishment, the ministry has decided to restrict the number of arrivals for this year. Dr. Godahewa did not elaborate.He also said the country is facing difficulties with insufficient lodging capacity and requested the community to play an active role in creating the needed rooms to cater to this growth.

The Island Financial Review recently reported that former England cricketer Tony Greig was appointed Sri Lanka Tourism ambassador for US$ 10,000 for a six-month period to promote Sri Lanka as a favourable destination.

The government has also encouraged star-class hotels in the island to increase their rates in a bid to attracting high-spenders.

France is formally recognizing the Libyan opposition's Interim Governing Council as the "legitimate" representative of the Libyan people - the first country to do so.

France said Thursday it plans to exchange ambassadors with the council, based in the eastern city of Benghazi. Rebels took control of the city in a deadly uprising against Libyan leader Moammar Gadhafi.

The French announcement comes as NATO members begin two days of talks on Libya to discuss the possibility of imposing a no-fly zone to stop air attacks by pro-Gadhafi forces.

Western officials have expressed concern that a no-fly zone over Libya would have a limited impact on stopping the violence. But NATO diplomats say there is strong support for such a move if the Libyan government escalates attacks on civilians.

Diplomats from Portugal have held similar talks with Libyan officials.

Britain and France are drafting a United Nations resolution authorizing a no-fly zone. Top advisers to U.S. President Barack Obama met Wednesday to assess the situation in Libya and consider remaining options, including the option of working with international partners to impose a no-fly zone.

Gadhafi has said Libyans would take up arms against Western nations if they imposed such a zone.

Also Thursday, Russia announced it will ban all weapons sales to Libya.

And Germany has ordered a freeze on all bank accounts held by the Libyan central bank and the Libyan Investment Authority.

World needs to hold the Damocles sword against Mahinda head..FOREVER 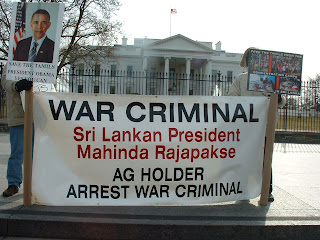 U. S. Assist. Secretary of State for South and Central Asian affairs , Robert Blake last week issuing a warning to the Sri Lanka (SL) Govt. stated, ‘UN Security Council reporting Libya to the International criminal court last week was a signal of global concern over human rights,’ he added. He was not comparing Sri Lanka with Libya, but the Security Council’s unanimous decision against Libya over the weekend underscored the resolve of the international community regarding crimes against humanity. What Blake implied was, if SL Govt. does not conduct its own war crime investigation, a war crime Tribunal will have to take over that investigation.


Libyan Leader Gaddafi too had a similar conviction  and pinned great hopes on it banking on the support  and strength  China  and Russia could give him. He was of the opinion that if the Libyan issue goes before the UN Security Council, China  and Russia would forestall it.  To Gaddafi’s consternation that fervent hope did not materialize. The Security Council including China  and Russia took an unanimous decision against the Libyan Leader. Indeed, Blake while requesting  SL to conduct a war crime investigation within SL had warned it to take a lesson from Libya. In other words he was pointing out not to neglect the war crime investigation depending on China and Russia.
The SL Govt. which is reposing confidence in China, Russia and its other friendly countries is flaunting its strength overly before America and the Western countries . Yet, it has become obvious following the Libyan people’s  rebellion, neither China nor Russia will be able to come to the rescue of SL in a crucial and decisive moment. Libyan leader Gaddafi was also one of those leaders who placed tremendous amount of faith and hope on countries like SL apart from China and Russia. At the 40th Anniversary celebrations of the Libyan revolution, Gaddafi invited the leaders of his friendly countries. Among them he recognized  four  international ‘true friends’ : one of them was SL President Mahinda Rajapaksa; others were, Pakistan Prime Minister Yousuf Gilani, Venezualan President Hugo Chavez Frias and the Philippine  President Arroyo. But, to Gaddafi’s deep consternation, at the moment when he was in deep turmoil and trouble, none of his ‘true friends’ could lend him a hand. When Gaddafi spoke to SL President Mahinda, the latter too had told him to restore peace in Libya. Similarly he ought to have spoken to Pakistan, China, Russia   and Venezuela leaders. Yet , today none of them is in a position to assist him.
At home, the SL Govt. is reposing great hope and confidence  in Pakistan and Venezuela. Wherever Venezualan President goes ,  his favourite pastime is castigating America and the Western countries – the only option he has. In the event of an uprising against him, he would also have to meet with the same fate  as Gaddafi. The view of the SL Govt. is that it can with the help of the countries constituting China’s ‘string of pearls’ including Pakistan, surmount any critical situation in the UN security Council by pressurizing China into supporting SL. Pakistan, China and Russia are countries which backed SL during the ethnic war. Nevertheless after the recent  Libyan people’s uprising it has become clearly manifest that they are not in a position to render assistance to SL on the war crimes issue. These countries are well aware that they cannot afford to antagonize America and the Western countries, as they  do not want to  plunge their own countries into financial  straits and economic crises by offending them. Indeed, they supported SL during the war but that was  because of their motive  to  develop  their own economy – they sold arms and accumulated profits.. Hence, they cannot be expected to help SL on the war crime issue since  their  objective is  to safeguard their  own economic fronts.
This is the bitter truth. Therefore it is well for the SL Govt. to realize this bitter but stark truth and seriously heed Blake’s warning. It is only India which can change the tough attitude of America and Western countries towards war crime charges. It is true India is a ‘big brother’. It is also true that  in a family too a big brother bullies a ‘smaller brother’. By trying to flaunt his superiority he goes even to the extent of bickering with him. He even expects  his smaller brother to act according to his wishes and needs. But when problems mount from outside he safeguards his younger brother nevertheless. This is precisely why he is considered a ‘big brother’. Thus the only country which can ultimately provide support to SL is India . India too is well pleased when the war crime issue against SL snowballs internationally, for , it is only then SL will be disabled from taking a tough stand in relation to India when aligning itself with  Pakistan and China. India can demonstrate its ‘big brother’ role only in those circumstances. Mahinda once told the Indian media that India should not act like a ‘big brother.’ But as far as India is concerned it has to necessarily and  compulsorily show that it is a ‘big brother’ to Mahinda.
Posted by Chennai Guy at 10:08 3 comments:

SHOULD TNA continue talking with Murderers ? Tamil National Alliance parliamentarian from Vanni, S. Sritharan, narrowly escaped from a group of attackers who lobbed two hand grenade targeting his vehicle and fired at the vehicle using pistols from behind Monday evening around 6:00 p.m. at Nochchiyaagama in Anuradhapura, TNA parliamentarians told media. The parliamentarian was on his way from Vavuniyaa to Colombo to attend the Tuesday sittings in SL parliament. No one was hurt in the attack, SL Police in Anuradhapura said.
The armed men fled the site when the security guard of the parliamentarian opened fire in self-defense, the sources further said.

The MP has complained to the Sri Lankan Police hierarchy and has sought refuge at a secure place.
The assassination attempt on Mr. Sritharan comes 3 years after TNA MP for Vanni Mr. Sivanesan was assassinated in a targeted Claymore attack allegedly by Sri Lanka Army Deep Penetration Unit (DPU) inside the then LTTE controlled Vanni.
Posted by Chennai Guy at 01:38 1 comment: