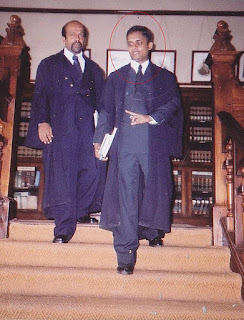 International human rights organisations have expressed serious concern over the safety of a Sri Lanka law student who has previously complained about alleged malpractices of the Law College (SLLC).

DM Thushara Jayaratne, the whistleblower of alleged exam malpractices by Namal Rajapaksa, MP, says he was assaulted by a group of assailants on Thursday at a safe house.

Though he was not physically injured, say activists, he is suffering from post-assault trauma.

The Asian Human Rights Commission (AHRC), has also raised serious concern over the lack of investigations into the continued attacks on the rights defender.

Human rights organisations have protested against this treatment and requested a credible inquiry into his allegations. However, no such inquiry has been conducted," AHRC director Basil Fernando, said.

Mr Jayaratne was previously abducted, assaulted and regularly intimidated after he lodged complaints against President Mahinda Rajapaksa’s son, according to a complaint lodged earlier this year with the UN Special Rapporteur on Human Rights Defenders.

While the national human rights commission has refused to entertain his complaints, the police have failed to launch any inquiry, the UN was informed.

"We are concerned about his security and call upon everyone to request from the government to inquire into this matter and also to provide him the security that he is entitled to," Basil Fernando added.

Harassment, intimidation and attacks against human rights defenders who expose abuses in Sri Lanka are not uncommon, according to Amnesty International.

"Many victims of human rights abuses feel an increased sense of insecurity as there is a lack of credible domestic mechanisms for filing and investigating complaints," added Ms Foster, AI's researcher on Sri Lanka.
Posted by Chennai Guy at 08:08